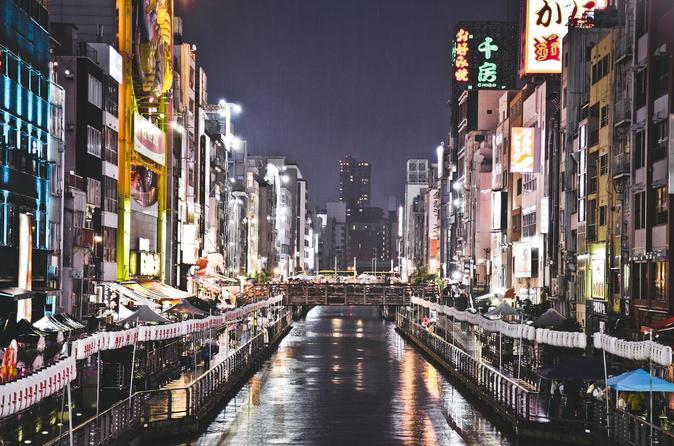 Often missed on many Japan itineraries, Osaka is more than just a city of commerce: it is the Kansai region’s vibrant and eclectic heart and soul. This tour takes you by buzzing markets, through a lantern-lit labyrinth, and into the districts famed throughout Japan for their culinary variety and unforgettable atmosphere.

Osaka is often missed on the map when people take a whirlwind trip across Japan. In between the bright lights and fast pace of the ultra-modern Tokyo and the old-world charm and culture of Kyoto, people often forget that there exists a city that combines the best of both worlds! Uptown Osaka is a sea of sleek skyscrapers, bright lights and modern living. And if you travel further south, you come to the real heart of Kansai. Osaka’s rich and vibrant culture is as unique as it is robust. People greet each other with “Have you eaten yet?” more often than not!

Your Osaka tour begins outside the Nipponbashi Station and leads into the Kuromon Ichiba market, a street containing over 500 meters of lively market stalls selling Osaka’s freshest meat, fish, and vegetables. You’ll have a chance to experience the downtown’s classic market culture up close, punctuated by rich aromas and the boisterous Kansai-ben (Osaka dialect) of the locals.

You’ll move on to Doguyasuji to see the infinite array of Japanese cooking utensils, as well as stopping to look at the ubiquitous ‘fake food’ selection, a surprisingly large market exists for this uniquely Japanese trade! From here, you’ll go to the Dobutsuenmae Station and walk to Shinsekai, entering the true core of Osaka’s famous downtown.

Shinsekai (literally meaning ‘New World’) was created as an amusement area in 1912, modeled on New York City. Complete with a viewing tower and the now infamous Luna Theme Park, Shinsekai represented Japan’s ambitious move toward the future. The area is still home to the ghosts of those ambitions over 100 years later, caught between the hum of neon lights and the gentle swaying of traditional paper lanterns. You’ll have a chance to see a traditional Sento (Japanese bath) and a newer Supersento, a stalwart of everyday Japanese life! As you leave Shinsekai, you can sample the much-loved Shinsekai kushi-katsu (deep fried or basted meat and vegetable skewers) and pass atmospheric and traditional izakaya (Japanese-style pubs) before moving onto the glittering jewel of southern Osaka, Dotonbori.

Dotonbori is easily the most famous area in Osaka, complete with a long canal flanked with shimmering shops and restaurants, a well-known running man, and a giant mechanical crab! The subject of postcards and tourist photos in equal measure, Dotonbori is home to endless clusters of restaurants, street vendors, bars, and pubs. You can sample Osaka’s most famous food, takoyaki (fried batter balls containing octopus legs) and walk along the canal, passing ever-moving neon signs and the billowing steam of Osaka’s liveliest restaurants. If Kyoto is the heart of western Japan, Osaka is truly the soul.

Often missed on many Japan itineraries, Osaka is more than just a city of commerce: it is the Kansai region’s vibrant and eclectic heart and soul. This tour takes you by buzzing markets, through a lantern-lit labyrinth, and into the districts famed throughout Japan for their culinary variety and unforgettable atmosphere.