Day Trip by Bus to Kyoto from Kyoto (with Halal Lunch) 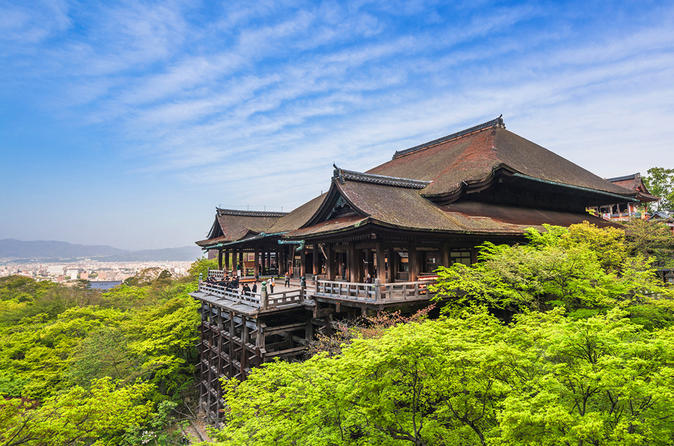 This is an easy, culturally-enriching bus trip from JR Kyoto station to Kyoto. The tour stops at the Fushimi Inari temple and the UNESCO world heritage sites, the Kiyomizu-dera temple and the Kinkakuji temple.

First stop of this tour is he Fushimi Inari Taisha Shrine. The Fushimi Inari Shrine is the head shrine for some 30,000 Inari shrines all across Japan. It is especially famous for its seemingly endless 1,000 vermilion shrine torii (gates). Fushimi Inari was dedicated to the gods of agriculture, the deities were enrolled to ensure prosperity in business, a bountiful harvest and traffic safety. You'll spend time in Fushimi Inari Shrine from 9:45 am until 11:20 am

*You might transfer from Fushimi Inari to Kiyomizudera by taxi in the high season.*

The next stop is Kiyomizu-dera (11:50-13:30) There is a Japanese proverb regarding  "jumping off of the stage at Kiyomizu." This is the Japanese equivalent of the English expression "to take the plunge." Here in the Main Hall, there is a large wooden stage that juts out over the hillside. It was built without using a single nail and is supported by 139 pillars. The view of the city of Kyoto from this Kiyomizu Stage is magnificent. The Kiyomizu-dera (the temple of clear water) was named after the Otowa Waterfall which is said to be good for your longevity, health, and study if you drink from it. This temple is famous for the cherry blossoms in spring and the foliage in autumn. You'll have lunch at Kiyomizu-dera Area (Halal Bento).

After lunch, you will tour the Kinkaku-ji temple from 14:10pm. Kinkaku, a pagoda made to house the sacred relics of the Buddha, has given this temple the popular name of Kinkaku-ji (Temple of the Golden Pavilion). But the official name of this branch temple of the Rinzai sect Zen temple of Shokoku-ji is Rokuon-ji. This complex, whose gardens and architecture focused around a central Golden Pavilion, was said to evoke paradise on earth. And the view of Kinkaku which is reflected in the Kyoko-chi (Mirror Pond) is very beautiful. This was built by the third Ashikaga Shogun Yoshimitsu for his own villa but turned into a temple after his death. This temple was rebuilt in 1955.

The final destination is Arashiyama district, located in the Western part of Kyoto. This area becomes most attractive around early April and late November when the cherry blossoms bloom and the colors of the fall seasons usually peak. During the summer months, traditional cormorant fishing is practiced on the Hozu River for tourists to watch. One highly recommended spot is the Sagano Bamboo Forest. It is a pleasantly cool 100 meter long walkway that begins from the side of the world heritage Tenryuji Temple. You'll spend time here from 15:30 pm - 16:50 pm.

After a long day visiting many UNESCO sites, you will be dropped off at JR Kyoto station (17:30pm)

This is an easy, culturally-enriching bus trip from JR Kyoto station to Kyoto. The tour stops at the Fushimi Inari temple and the UNESCO world heritage sites, the Kiyomizu-dera temple and the Kinkakuji temple.